Want to get your brand in front of over 187 million people? Scale your brand on Twitter? Get better returns on your advertising money? Let our team of experienced advertising specialists help you realize your Twitter marketing goals!

We’ve already helped businesses like yours increase their brand’s presence on some of the biggest social media platforms. You can expect nothing less for your business. 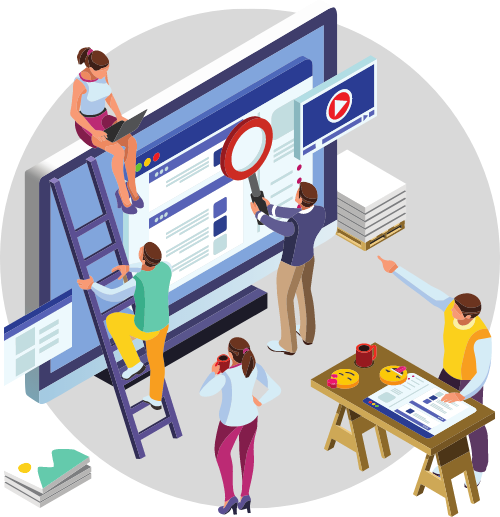 Types of Twitter Ads Our advertising professionals can help you create ads in the following formats.

This is the most versatile and popular Twitter ad format. It allows you to promote your tweeted content across the platform. The content type can vary widely. You can promote polls, texts, images, videos, and even carousel ads. It even allows you to create moment ads – a collection of tweets that tells a story.

More than just your tweets, Twitter also allows you to promote your account. This ad format is specifically designed to increase your brand’s visibility and attract new followers. So if you’re having a hard time building a following on Twitter, this is the type of ad for you.

Following in the footsteps of YouTube and Facebook, Twitter also now has video ads embedded within videos. This lets you align your ad with premium video content from the most relevant accounts. Twitter even lets you choose from over 15 video categories to serve your ad in.

From the name itself, this ad format lets you take over Twitter’s timeline for a certain amount of time. And by takeover, we mean, your ad will be at the top of everyone’s feed. So that’s the first thing they’ll see every time they open Twitter.

Do you have a big piece of news you want to share with the world or a major announcement to make? Twitter’s live video ads help your livestream content reach more people and even lets them engage with your video in real-time.

“Nobody counts the number of ads you run; they just remember the impression you make.”

Committed To Our Clients

We’ve been fortunate enough to have worked with some outstanding people and companies. Our agency has remained fully committed to our clients and their customers. This resolve has been our strategy that has helped our agency become award winning in our industry.

Get started with us today. Select an option below to learn more or contact us.

1. It’s the Internet’s Most Engaged Community

If you’ve ever been on Twitter, then you wouldn’t question this. Just looking at the Twitter wars that flare up every now and then, Twitter has undoubtedly the most passionate and engaged users on the internet.

Out of the platform’s 187 million active daily users, 59% regularly get their news from Twitter. Plus, the platform is expected to grow at least 2.4% each year. About 80% of Twitter users are also from outside the US. So if you’re planning to go global, Twitter can take you there.

3. Pay Only for Conversions

One of the best things about advertising on Twitter is you only pay when you achieve your marketing goal. Whether you want more conversions or engagement, Twitter will only charge you when people take that action.

For instance, if you promote your account to gain more followers, you’ll be charged only when someone follows you. If you run an app install campaign, your total bill will depend on how many people installed your app.

Though Facebook also offers a similar PPC scheme, Twitter is definitely better when it comes to lead generation.

Engager targeting is a type of advertising that allows you to specifically target people who have recently seen or engaged with your posts. This is actually one of Twitter’s major advantages over other social media marketing platforms.

When you look at it from a marketer’s point of view, engager marketing makes so much more sense. Instead of targeting some random guy on Twitter, it lets you get your ad in front of people who are already interested in your content. Obviously, these are also the very same people who will most likely click on your ad, follow your account, or download your app.

Yes, every online advertising platform offers keyword targeting. But on Twitter, you can target those people who used a specific keyword in their tweet or have engaged with a tweet containing those keywords within the past seven days. It also lets you get your ad in front of people who used a certain hashtag.

Compared with other social media platforms, Twitter’s keyword targeting tends to be pretty granular. On Facebook, you can only target people who are interested in a certain topic. But going for an exact keyword is more specific and often yields higher conversions. In short, that’s where the money is.

Aside from specific keyword targeting, Twitter also lets you create your own tailored audience to target for your ads. This means you can easily target your competitor’s followers. This also makes lead generation so much easier. You don’t even need their emails or phone numbers. Twitter only requires account handles (which you can easily get with a data scraping tool) to create a tailored audience for your ads.

According to Twitter, the best performing tweets are those with copies ranging from 50 – 100 characters. They’re short, have no frills, and get directly to the point.

This is one of the most important parts of any ad and obviously, a strong CTA is necessary for Twitter ads too. Twitter ads with clear instructions on what the reader should do next tend to have better conversions.

While adding lots of hashtags and mentions may increase a tweet’s visibility, they don’t necessarily work for ads. On the contrary, they only serve as distractions that your audience might click on.

The saying that “a picture is worth a thousand words” couldn’t be more true for ads. Stunning visuals that make your audience stop and think always make for a great Twitter ad – or any kind of ad for that matter.

Here at Correct Digital, we take our client’s trust very seriously. That’s why we always strive to create brand-centric and data-driven ad campaigns that drive conversions.

In advertising, success won’t always be guaranteed. But when you work with us, rest assured that you get:

Our ad campaigns are always based on the latest available data. We use premium tools and strategies to search for the best keywords and target audience. We are also always on the lookout for the latest changes in social media algorithms that might affect your ad’s performance.

A high ROI (return on investment) means that you are earning more money than what you spend on ads. It also means that your ad campaign strategy is working.

A Dedicated Team of Experts

Our clients enjoy a dedicated team of experts working on their Twitter ads. From creating stunning graphics to formulating engaging copies, our experienced team of advertising specialists will work with you every step of the way.

Apart from Twitter ads, we also offer other digital marketing services like SEO and social media management. When you work with us, we will tailor your ads to align with your other online marketing campaigns.

As professional marketers, we don’t go in blind. Every Twitter advertising campaign we do goes through a specific process to ensure favorable results.

1. We discuss your needs.

We understand that every business has different advertising needs and goals. As such, we always start our process by finding out what you need and what you hope to achieve with your Twitter ad campaign.

We use the most accurate data-tracking tools to gather and analyze information necessary for creating high-performing ads.

3. We identify your audience.

Identifying the right audience to target for your ads is key to a successful campaign. We take advantage of Twitter’s own lead generation tools and other data-scraping tools and techniques to identify the people who will most likely engage with your ad.

4. We develop the actual ads.

Armed with the necessary keyword and audience data, we develop ad strategies and create the actual ad content.

5. We monitor your ad’s performance.

In advertising, no matter how tight your strategy is, there will always be room for improvement. That’s why we constantly monitor your ad’s performance to look for ways to maximize your campaign.

6. We recalibrate your campaign if necessary.

Your ad’s performance is a good source of information on what and what doesn’t work with your audience. With that, we may fine-tune or recalibrate your advertising campaign if necessary.

7. We send you the reports.

As we’ve said, we will work with you every step of the way. We will send you monthly reports to keep you in the loop on how your campaign is faring.